News
Design for Sharing: 50 years of getting L.A. K-12 students in front of live performances

Design for Sharing: 50 years of getting L.A. K-12 students in front of live performances

The education arm of UCLA’s Center for the Art of Performance, the program has brought nearly half a million students to campus to experience the wonder of performing arts.
March 30, 2020
Share:

Around the same time NASA was preparing to launch humans to the moon, a pair of women philanthropists in Los Angeles were meeting in their living rooms to think about how to make sure more local kids could experience the power of the performing arts.

They were Mimi Perloff and Blanche Witherspoon, whose passion and organizational prowess resulted in Design for Sharing the Arts at UCLA. Now known as Design for Sharing, the program has in its first half century served nearly half a million K-12 students, giving them the opportunity to participate in live performing arts events on campus and in their classrooms.

They arrive in buses from across the city. They fill Royce Hall with a boisterous energy to watch renowned musicians, dancers and theater makers from around the world. They come in smaller groups for more intimate performances and art-making workshops.

“They are welcomed into this space — most often Royce Hall — and you just see them react to the grandness of the space itself,” said Meryl Friedman, director of education and special Initiatives for UCLA’s Center for the Art of Performance, which oversees Design for Sharing. “And then they get to experience this art, which they also don't either know much about or have access to. And it frankly blows their minds. Every program, small or large, involves some kind of direct interaction with the artist so that they get to hear about their lives and their story and what they do every day and how they got to where they are.”

And kids learn to dream by experiencing art and hearing the stories of artists.

“I think that’s the hugest impact that we have of everything that we do, is that these students see firsthand what is possible,” Friedman said. “Not necessarily that they could be an artist or a dancer, but that with some hard work and some passionate belief in what they are passionate about, that they really could do anything.”

Over the last 10 years, Design for Sharing staff have been embedded as arts educators at the Robert F. Kennedy UCLA Community School in Koreatown. Every year they work with about 100 fourth- and fifth-graders on projects that include creative writing, movement and visual arts practices.

In honor of Design for Sharing’s 50th anniversary, which happened to coincide with the 50th anniversary of the Apollo 11 moon landing, DFS staff developed a program for that year’s community school project that culminated with the students attending a performance from theater maker and mime Andrew Dawson. His “Space Panorama,” is a reenactment of the mission from launch to landing told only through hand and face gestures.

Earlier, Friedman and education program coordinator Theresa Willis Peters worked with community school students on two projects related to the moon and Apollo 11. For one of them, students came up with their own moon launcher designs, using recycled materials from a group called Trash for Teaching.

The other was a haiku project that drew inspiration from a folkloric story found in several Asian and indigenous cultures, “The Rabbit in the Moon.” Students wrote their own haikus in honor of the story and created collages, which were later put on display in Royce Hall for all “Space Panorama” ticket holders to see.

Design for Sharing residencies at the community school leave a lasting impression on the students, said Daniel Sotelo, a UCLA alumnus who has been teaching at the school since it opened.

“Some things they wrote this year blew me away,” Sotelo said. “It makes me look at my students and think, ‘Wow! I never would have seen this side of you without the presence of Design for Sharing.’ Throughout the years our partnership has grown closer and expanded to include other artists from around the city. This embodies the idea that we are a community school and a community with UCLA.”

Looking forward, Design for Sharing staff hope to expand their on-site projects to other schools in Los Angeles.

When Design for Sharing started, founders were simply buying blocks of tickets to UCLA performances and giving them to teachers at local schools to distribute to students. 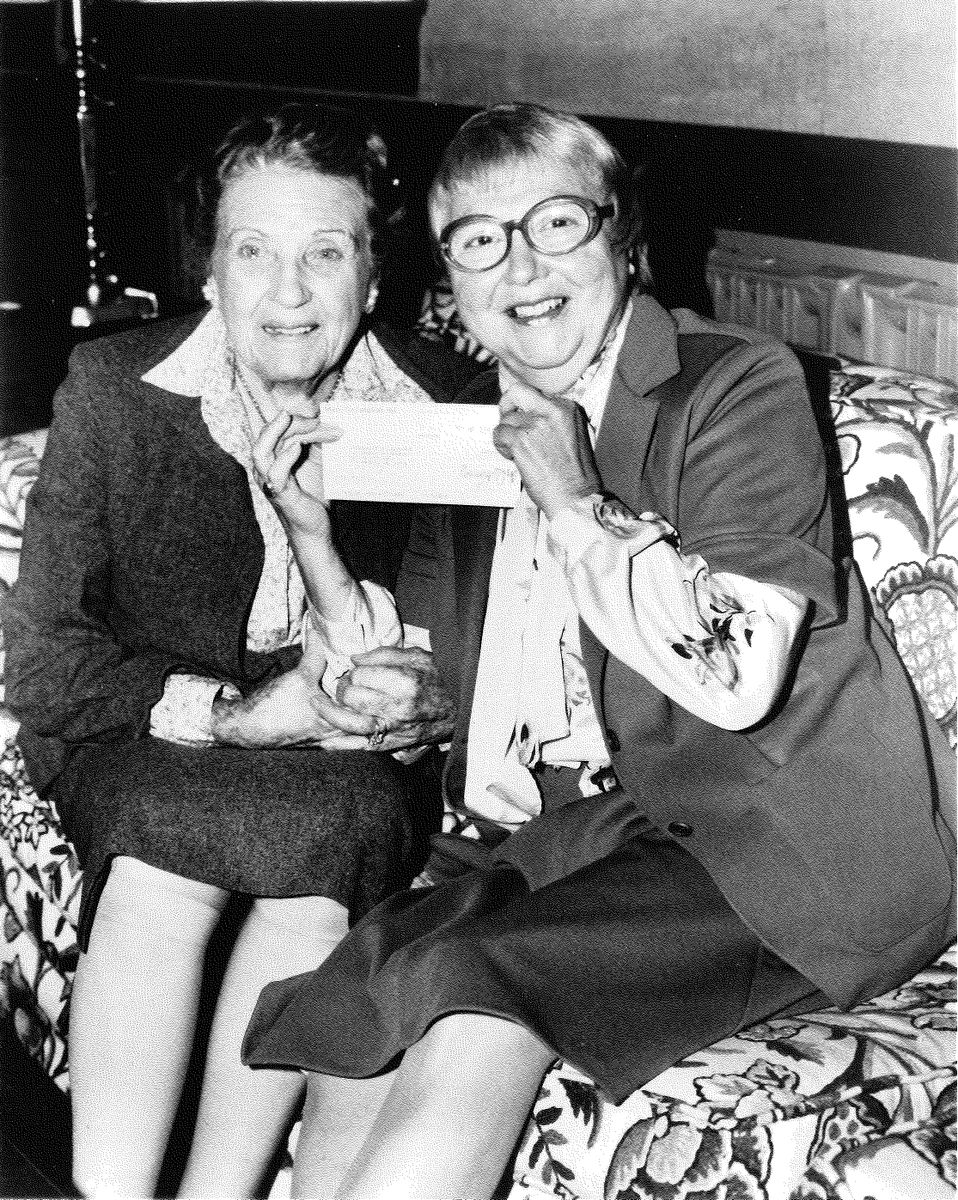 “Very quickly, it transitioned into an opportunity to present matinee performances for big groups of school kids during the school day as a field trip opportunity to a research university and a professional performing arts hall,” said Willis Peters, who graduated from UCLA in 2003, and just never left campus, transitioning into her role as arts educator and presenter.

Now, Design for Sharing presents as many as 20 performances attended by more than 11,000 Los Angeles schoolchildren every year. Most of the performers are artists on the main CAP UCLA season program who agree to do a special morning demonstration performance during their scheduled time on campus.

DFS staff provide information on the artists that teachers can build into their lessons prior to the performance.

“We don’t ask these professional artists to do something different for kids,” Friedman said. “We make sure that what they’re doing is suitable for kids and we ask them to do that. They don’t do something that’s watered down or dumbed down.”

It’s energizing to the artists as well, who are often very moved by the reaction of these young audiences, Friedman said.

DFS is completely donor supported and relies on a deep well of goodwill from benefactors in Los Angeles. Donors to the DFS bus fund ensure that the program can pay for transportation — a critical element, as most local schools lack transportation funding.

“We are celebrating our 50th anniversary as one of the oldest nonprofits on the UCLA campus, and as an aside, no one really knows us,” said Stephanie Snyder, president of the Design for Sharing advisory council.

But, she said, once a donor gets involved, they are totally engaged.

“I have been doing this for eight years and have no intention of stopping because I want to keep this alive and kicking,” she said.

Snyder and her fellow donors love to attend the demonstration performances, sometimes coming in the morning for the student audience and then also back again for the evening performance. 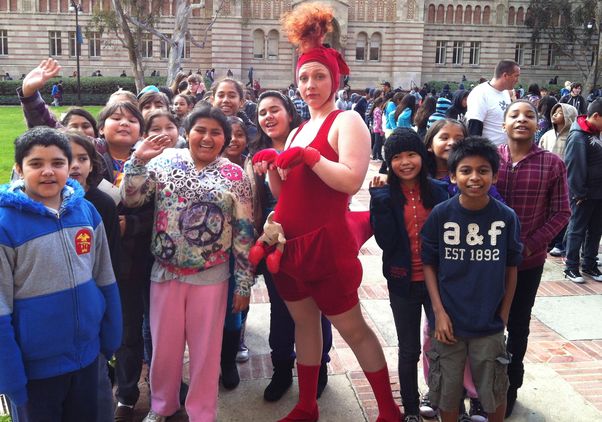 Design for Sharing
A performer from Australian troupe Circus Oz.

“When you leave there after those morning performances, you feel so good all day long that there isn’t any good deed you can’t do,” she said.

Kids come to campus with their backpacks in tow, and are ushered into Royce Hall in a well-choreographed seating sequence. After the performances, groups often stick around to have lunch in the grass and explore the campus. DFS staff provide information about UCLA, trying to inspire a vision of college for young students who may be visiting a university campus for the first time.

When Friedman looks to the next century of UCLA, she sees DFS continuing to fulfill its mission of making the performing arts accessible to all, something that is likely to become even more critical in a technology-obsessed culture.

“I think that the two visionary women that founded this were really onto something,” Friedman said. “It was a very simple idea. And in 50 years, kids will still get on a bus or some other mode of transportation and come to a hall of renown or a workshop or a rehearsal hall or a grassy area and gather together to experience art. Nothing virtual can really replace that.”