News
A Bruin pulse for CicLAvia’s journey through the heart of L.A.

A Bruin pulse for CicLAvia’s journey through the heart of L.A.

What do you get when you add up six miles of car-free streets, eight typically car-congested Los Angeles neighborhoods, tens of thousands of cycling, skating and walking Angelenos, and a squad of smiling UCLA ambassadors speaking about the campus’s impact on society?

Catherine Geanuracos, chairwoman of the CicLAvia board of directors, acknowledged the partnership during her welcome remarks Sunday. “UCLA has been creating our educated, engaged community for 100 years, and we’re so happy to be here with them today.”

A two-block row of blue and gold UCLA booths at the event’s Civic Center hub gave downtown a distinct Bruin presence for the 33rd edition of the open streets event.

“The heart of L.A. goes through eight communities: MacArthur Park, Westlake, Pico-Union, historic downtown, Civic Center, Chinatown, Little Tokyo, Arts District and Boyle Heights — all in a 6-mile span,” said Romel Pascual, executive director of CicLAvia and a UCLA alumnus. “What CicLAvia does is introduces us to places we probably would not have been to if it hadn’t been for CicLAvia.”

The event, which was inaugurated in 2010, also demonstrates the city’s commitment to reducing carbon emissions, according Seleta Reynolds, general manager of the Los Angeles Department of Transportation, who also spoke Sunday.

Research by the UCLA Fielding School of Public Health and UCLA Luskin School of Public Affairs supports that assertion. Scholars from both schools were on hand to share research on the air quality benefits of CicLAvia and tips on improving the future of our communities. In addition, faculty, students and staff from across campus offered glimpses into what’s happening in UCLA classrooms, labs, studios and offices. Booths included:

And the UCLA Labor Center had representatives at the MacArthur Park hub talking to visitors about UCLA’s work toward achieving equity in education and employment.

“Josiah Royce, the great American philosopher for whom one of UCLA’s original buildings was named, celebrated the beloved community,” said Jennifer Poulakidas, UCLA’s associate vice chancellor for government and community relations. “And this beloved community is a community capable of achieving the highest good as well as the common good. With every route, CicLAvia achieves just that. It binds us together and allows us to experience and connect with our city like we really hadn’t been able to do before this.” 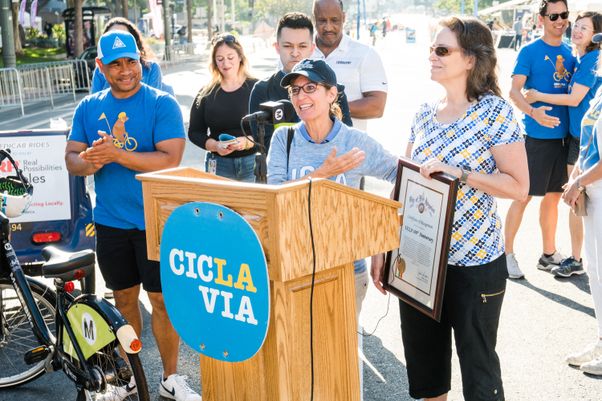 The Civic Center hub — in view of City Hall — held special significance as the headquarters for UCLA’s CicLAvia presence. UCLA’s roots are in downtown, where the California State Normal School operated at the modern-day site of the Central Library. The teacher training school later moved to Vermont Avenue and in 1919 was absorbed into a new University of California campus.

Cheryl Lott, president of the UCLA Alumni Association board of directors, also spoke during the opening ceremonies.

“The ties between Los Angeles and UCLA are deep and many. One that has always stuck with me is the impact of UCLA alumni on Los Angeles and the world,” she said, before listing several alumni who have made imprints on the world. Then she singled out Pascual for his work with CicLAvia and presented him with a certificate of recognition from the alumni association.

As the opening ceremonies drew to a close, a representative from the office of city councilman Jose Huizar, also a UCLA alumnus, presented a proclamation to UCLA, recognizing the campus’s centennial.

“It’s so important to recognize that UCLA has a tremendously important role to play in Los Angeles and in the future of cities around the world,” said Emily Carter, UCLA’s executive vice chancellor and provost, a former UCLA professor who returned to campus on Sept. 1. “And that is one of the reasons I came back to UCLA after many years to help lead that effort.”